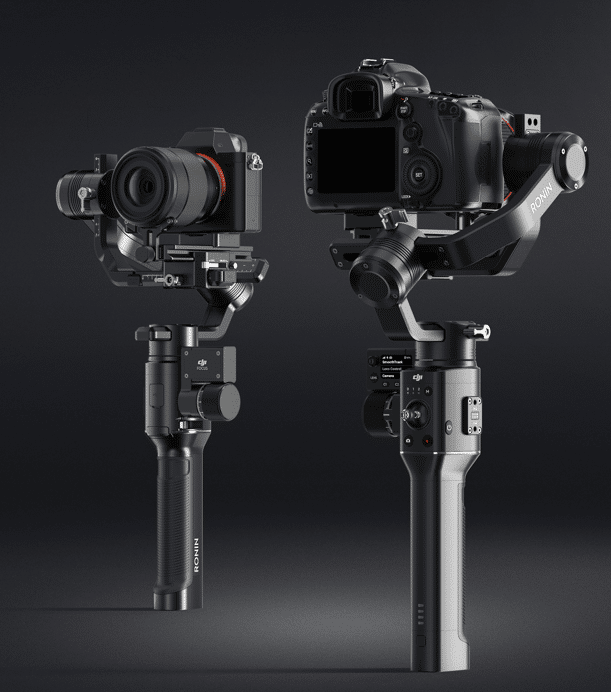 Since the release of the Ronin in 2014, DJI has offered its customers some very best options for the mirrorless, DSLR handheld gimbal systems. The DJI gimbal space is already crowded with too many models, but DJI’s proven track record of building high class gimbals makes it one of the top choices of consumers. At the CES 2018 event in Las Vegas, DJI introduced two new handheld Gimbals, the Osmo Mobile 2, an updated mobile phone Gimbal and a new handheld Gimbal, the DJI Ronin S designed for Hybrid cameras. Both the models are quite impressive and needs a closer look to understand their features and functionalities.

DJI has dominated the consumer drone market and now have shown their presence felt in the DJI gimbal space as well. The DJI Ronin-S is the first single–grip stabilizer for the mirrorless cameras and the DSLRs. Looking at the growing demand for single grip handheld gimbals for DSLR and mirrorless cameras DJI has introduced the above two models in the market. The most striking feature of the new DJI gimbal is the modular upgrades that provide more creative control. The right eco system of modular add-ons makes the Ronin-S a popular option for professional filmmakers who would prefer a gimbal system that is light-weight and can be held with one hand. But, that doesn’t mean you cannot transform it into an all-round two hand-system.

The new DJI Ronin S is very similar in looks with several other models from the different companies. DJI is a known company that produces some quality stabilization systems for both the sky and the ground. The Ronin S is DJI’s first single-handed stabilizer for the DSLR and Mirrorless camera. Even though the gimbal space is crowded with so many models trying to find their footing, DJI has garnered a lot of praise and appreciation for their quality gimbals. The innovative framework of the Ronin-S elevates the camera payload above the Roll Axis making the built-in display obstruction free and always in sight of the user. 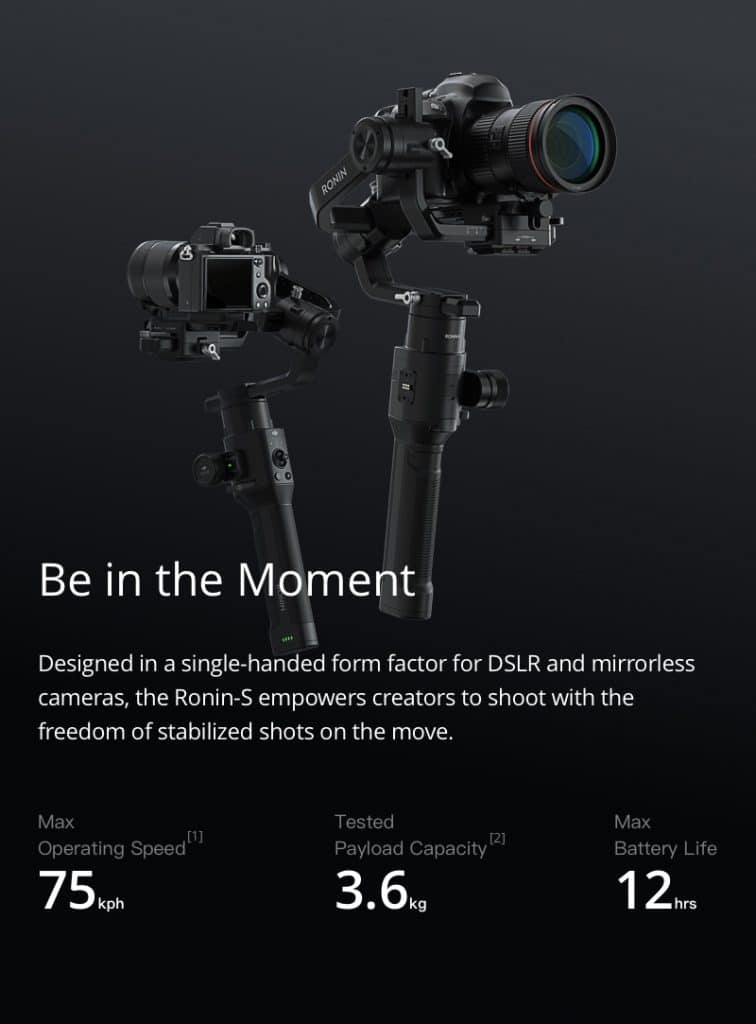 The DJI gimbal has some very nice features, which includes two frame sizes to include as many camera models as possible all in a slanted design. This allows for an unhindered view of the LCD screen. The strong high-torque motors helps support a lot of popular camera and lens combination, which includes the Panasonic GH, Canon 5D and the Sony Alpha series. The stabilization system of the DJI Ronin-S compensates for the zoom lenses with higher magnification ratios and an external zooming barrel. The advanced stabilization algorithms of the gimbal work with both the in-camera and in-lens optical stabilization technology.

The push mode of the Ronin-S allows you to adjust the Pan and tilt axis by hand when the Ronin-S is powered on. The axis locks aid in speeding up the set up process. The Ronin-S has a nice ergonomic and comfortable curved design that helps in capturing smooth cinema style movements from upright to the under slung positions without hindering the cameras display. The Ronin-S also comes with the DJI intelligent battery technology that can be hot-swapped during any project for an extended shooting time.

One of the user friendly features include the dedicated control buttons for the camera and the gimbal allowing the user to shift between smooth track settings, record and stop the camera. The high precision joystick changes the position of the camera to help frame the shot perfectly. The DJI Ronin-S comes with a new “sport mode” that allows for fast movement like sports and action.

The modes in the Ronin-S can be controlled through the DJI Ronin App, which includes complex camera moves like Hyperlapse, Panorama, Track and CamAnchor that allows you to allocate specific camera positions in a scene and rotate between them as on demand. The user can setup the Smooth track settings with dedicated controls for responsiveness of each axis. Settings of the camera can also be directly adjusted. 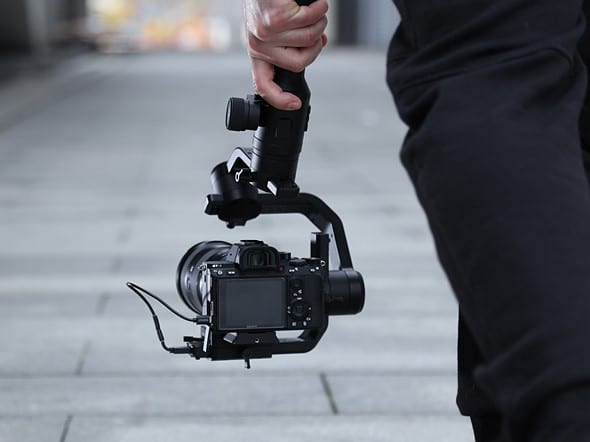 The Dji gimbal Ronin-S is compatible with a wide variety of DJI Pro Accessories, which includes the focus control center that consists of the focus dial and a Screen allowing advanced gimbal and focus control without any mobile device, vehicle mount solution, DJI master force, DJI master wheels, an external focus motor and a cheese plate adapter for use with third-party accessories.

The single handle can be removed so that the gimbal can be mounted to a RC buggy so that you can shoot at low angles or even it can act as a stabilized remote head when it is mounted to a jib. The dedicated DJI Focus Command Unit can be mounted easily to the accessory dock, which allows the users to pull focus when they are operating with a standard handle. You can also attach the Ronin-S to a dual handheld bar without compromising on the performance of the gimbal, focus or the camera shutter. The Dji ronin s comes with multiple accessory mounts, which provides full support for different add-ons like LED lights, microphone and even a wireless video transmitter.

DJI says the Ronin S will be available in “two frame sizes for either camera type”, which means it works equally well for the heavier DSLRs and the big mirrorless and the slimmer mirrorless camera. 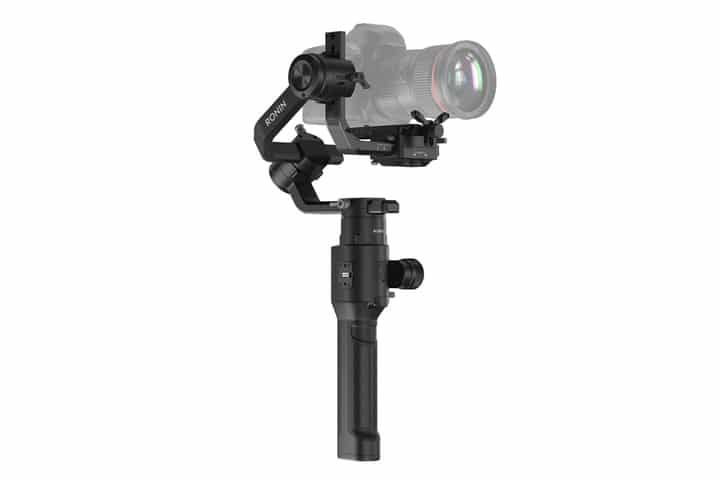