The Sony Alpha A7 III lies at the bottom of the list of Sony’s Full-frame mirrorless cameras range. It is designed primarily for enthusiasts and professional photographers. The Sony A7 series in the past was considered not as premium compared to the A7R and A7S series. The latter two models were popular for their higher megapixels and advanced video capabilities. The Sony A7 cameras on the other hand were touted as basic models with a good built quality and some average set of features. This was thing of the past, as with the third generation series having arrived, the Sony A7 III has a good mix of features from the top-end Alpha A9, Alpha A7R III, making it one of the premium brands from the stable of Sony.

The following Sony Alpha A7 III review will give you a detailed insight into one of the most sought after mirrorless cameras in the market. 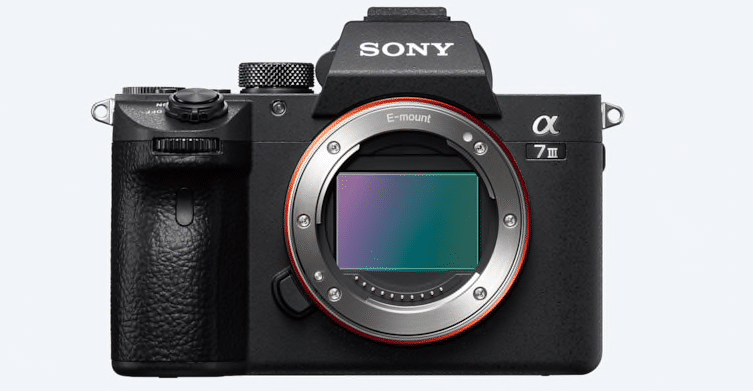 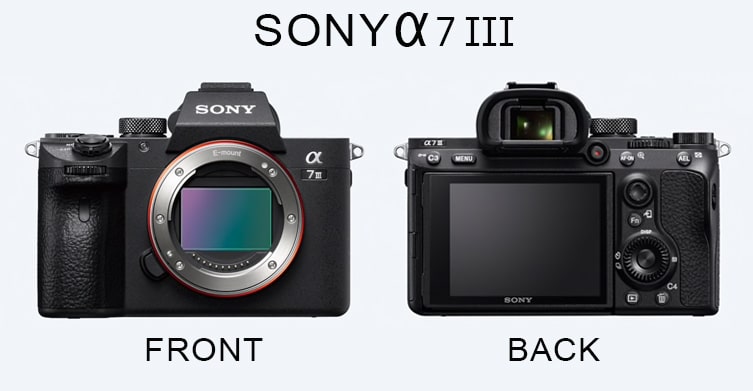 Sony has not increased the resolution in the third generation Sony alpha 7. But, the sensor in this camera is new with features like back-illuminated design, which is combined with the latest BIONZ X image processor that helps in improving the sensitivity range compared to the earlier models.

The ISO ceiling is extended to 204,800 that are two stops better than the A7 II’s 51,200 limit. According to Sony, it has managed to achieve a dynamic range of 15 stops with 14 bit raw files. The 2.3 million-dot EVF on the Alpha A7 III gives a higher magnification factor than the older models, which is up from 0.71x to 0.78x

The 3.0 inch tilt-angle touchscreen is touch sensitive, which enables the user to concentrate on focus-point and browse through the images fast. The only drawback to this feature is that it doesn’t allow quick navigation of the camera’s menu. The 5-axis in-body image stabilization in the Alpha A7 III is also tweaked allowing you five stops of stabilization, which is a slight improvement from its predecessor.

Also Sony has introduced 4k video to this camera, which is not a surprise. For recording in 24p the full width of the sensor is used with full pixel readout and without pixel binning. If you want to shoot at 30p, there is a 1.2x crop option that roughly uses 5k of the sensor.

The new Sony Alpha A7 camera offers a new HLG (Hybrid Log Gamma) profile that supports an instant HDR workflow allowing the HDR compatible TVs to play back 4K HDR footage. Both the S-Log2 and S-Log3 are available for increased color grading, but if you want to shoot Full HD footage you can do so at 120fps. The Sony A7 III comes with two SD card slots, but only one supports the faster UHS-II cards. To transfer images, there is Wi-Fi and NFC connectivity, but there is no Bluetooth.

The Sony Alpha A7 III comes in the same body as the Alpha A7R III with the same refinements to the control layouts. Since there is no dedicated dial or focus mode selector, this Sony Alpha A7 comes with a multi-selector joystick. The joystick improves the handling of the camera especially the AF point selection. The other great feature here is the introduction of the AF-On button on the rear of the Sony A7 III camera, which makes the back-button focusing easier. The button is placed in a nice position. The rear scroll wheel is raised away from the body slightly more than the previous generation camera. The eye sensor is now deactivated when the rear screen is pulled away from the body, which means you can shoot waist-level images without the feed cutting out and without swapping to the EVF. 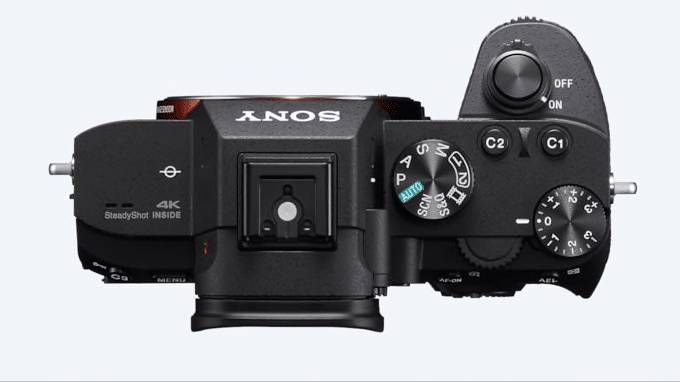 The body of the camera feels slightly thicker and more satisfying thanks to the refined grip. The overall feel of the camera is good due to the predominantly magnesium construction body with the back panel coming in plastic. As with all the major cameras at this price range, the main buttons and dials are sealed to protect against dust and moisture, a necessity for cameras of this caliber. The sealing on the various terminals on the side of the camera are a bit flimsy and you will have to be extra careful while shooting under not-so-ideal conditions. 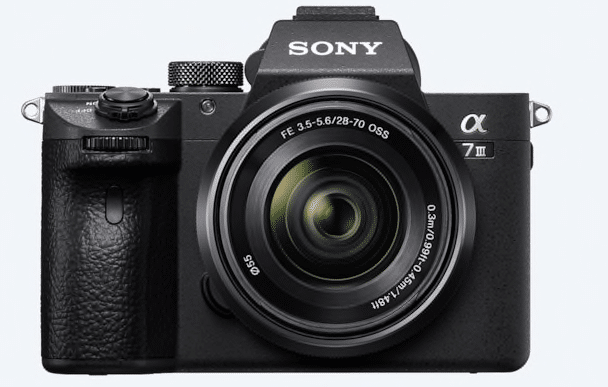 The new menu system in the Alpha A7 III is comprehensive and color coded, making it easier to navigate. Once you set up the custom buttons on the camera and taken advantage of the different custom buttons and various body mounted controls, then it is easier to go through the menu on certain occasions.

Sony has introduced the same high quality AF system from its flagship camera to the half price Sony Alpha A7 III, which is rare. It gets the same brilliant, 693-point phase detection AF system as the alpha A9. This is a big move from the ones found in the previous models. It offers an impressive 93% coverage across the frame with an additional 425 contrast detect points to improve focus. It can even focus in light levels as low as -3EV.The Alpha A7 III supports a wide variety of AF modes allowing things a lot simpler or advanced according to the shooting situations.
The continuous AF mode in the A7 III has a tracking performance that is quite impressive. The system is very reliable, but can get tricked occasionally by erratic and fast moving subjects. The A7 III has one of the best systems for tracking your subject, which is an exciting feature in a camera at this price point.

The Sony A7 III also gets the Sony’s latest Eye AF focusing mode, a great feature for social and portrait photographers. With the system activated, it will continuously track and focus on your subject’s eye even if they move away from the camera for a moment.

The A7 II could shoot at modest 5fps; the A7 III on the other hand shoots at 10fps, which is quite a significant change. Thanks to the addition of the Front End LSI pre-processor, it has helped to boost the performance of the Alpha A7 III in different areas. The camera boasts of an impressive buffer capacity of 89 compressed raw files or 40 uncompressed files. The A7 III will shoot at 10fps for 177 JPEGs, which is quite an improvement. If you have to shoot in quiet environments you have the option to switch to the electronic shutter and enjoy the benefits of silent shooting mode and still not worry about any drop in performance. 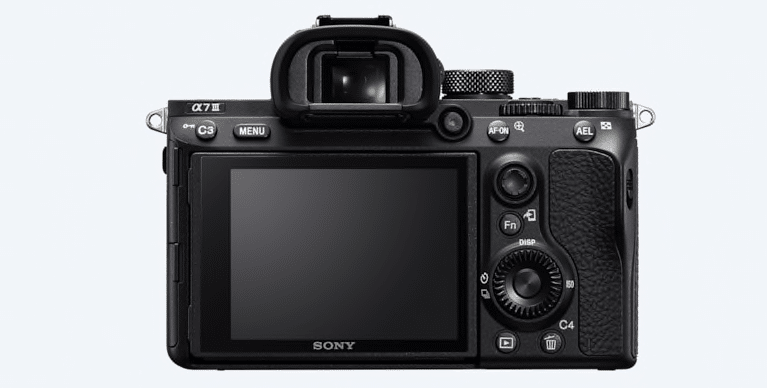 The A7 III camera comes with a large and bright viewfinder. The rear display is decent, but there is still room to improve the touchscreen integration especially in terms of menu navigation and on-screen settings adjustment. The 5-axis, 5 stop image stabilization systems works great giving you great confidence in shooting at lower shutter speeds. The battery life is great with 710 shots per charge, a good change from the A7 II models that used to have battery life of 350 shots per charge.

The 24.4 MP A7 III full-frame mirrorless cameras are capable of delivering high quality images with great detailing. The camera does a stupendous job. Since it has the stacked design sensor like the A9, it still doesn’t enjoy the same benefits, but the back illuminated architecture helps in excellent ISO performance. At the base sensitivities, the files appear clean and free of noise. Luminance noise is a bit more pronounced, but still fine. The chroma noise becomes noticeable in the raw files, but it is easy to suppress during post processing. The sensor of the A7 III offers immense flexibility for the dynamic range.

The Sony Alpha A7 III can be proud of some of its high quality features, performance or resolution compared to its expensive counterparts. This camera will not disappoint the user. Sony has made an honest effort to include features from its flagship models like Alpha A9 and the A7R III into this new model that offers fantastic performance, image quality and all at a great price.

The 693-point AF system is impressive; while the 10fps burst shooting speed will satisfy most photographers’ needs. The full-frame 24.2MP back illuminated sensor delivers a winning punch throughout the ISO range while the dynamic range is also impressive.

Design wise the Sony Alpha A7 III is a more refined than its predecessor while its ability to shoot uncropped 4k video makes this a very versatile camera. There are a few improvements needed, like more touchscreen controls are needed and less “tearing” in the viewfinder is welcome. These are very small issues, but if you look at the features the Sony Alpha A7 provides for the price, you will be more than happy to own this versatile full-frame camera.

The only competition as of now for the Sony A7 III is the Cannon EOS 6D Mark II, but in terms of performance, the A7 III is far ahead.