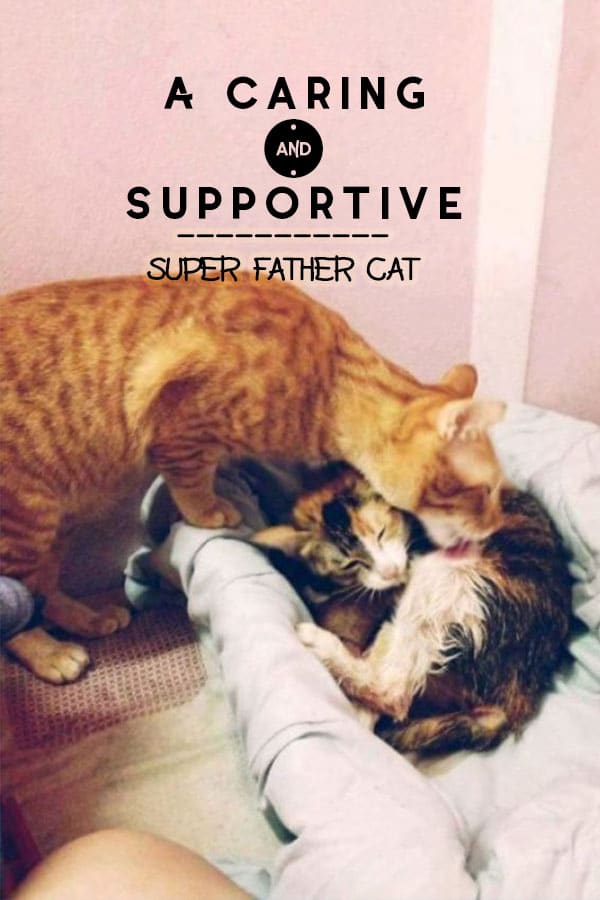 Childbirth is always a joyous moment, though it can be stressful at times. Giving birth and taking care of the kids mostly is the responsibility of the mother especially in the animal world. Caring, supportive and loving are some of the adjectives that are associated with the males in humans, but if these features are found in a male cat you would be surprised for sure. Fathers love to set an example and be role models for their kids, and these qualities are seen even in this cat. We are used to cat having kittens away from their fathers in a secluded place, probably they have reasons for that.

Cat birth and caring for the kittens is mostly done by the mother and father is rarely seen taking active participation in kitten rearing. New born kittens are tender and mother cat knows what to do exactly to keep them safe and comfortable. Kitten rearing is not the forte of male cats and they generally won’t care. There are exceptional cases though where all these rules don’t apply. But, this male cat was about to become a father and one could see his concern and care that he won’t leave the mama cat while she was giving birth to kittens. 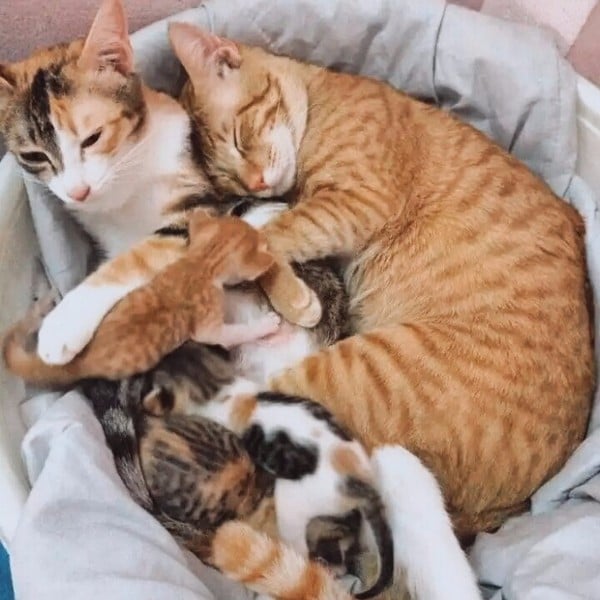 Thuy Duong Panda from Vietnam shared some photographs of this rare sight on Facebook, of the father cat Yello showing all his support to the mother cat having kittens during and after the cat birth. Yello was quite comfortable in his role. He was seen snuggling the kittens and cozying up with the mom. The sight was unbelievable. The father cat displayed so much love and devotion to his family that it was very touchy.

Child birth and becoming a father first time or not, is always a stressful moment for all humans. These emotions were surprisingly seen is Yello, the expectant cat father. The dad at first looked quite stressed like any expectant father would be at that point.

Probably he realized that being stressful will not help and decided to show his care and attention towards the mother cat, Tam The. Yello, was seen showing his caring side by intermittently licking the mother and helping her calm down. This is a rare sight in cats, and even the mother cat would not have expected this kind of behavior from Yello. This mother cat is surely a lucky one who may not have to worry about cat birth and about the safety of her new born kittens. Probably by licking and by just being there with the mother cat, this father cat has made the whole childbirth process smooth and less stressful for this mother. He was there for her throughout the delivery. Finally, after all the pain, the mother cat gave birth to 4 healthy kittens. The father was surely relieved by this.

The sight of the new mother with her healthy kittens was just amazing. The cat family members seemed relaxed and were enjoying the family moment. The father cat was seen caring and loving the kittens. Male cats never take active participation in kitten rearing, their aim is to move their DNA around and keep their gene pool strong and alive for generations. Surprisingly, Yello was showing paternal instincts and taking care and loving his kittens just like a father would do. He was seen licking them to cleanliness and enjoying every session with his kittens. Seeing Yello cuddling his kittens was quite a surprise since this kind of behavior from male cats is uncommon, but that doesn’t mean it is nonexistent.

After the cat birth, Yello was seen cozying up to the mother cat along with the newborns and he seemed quite happy and content. Even the mother cat looked comfortable with him being around, which is rare. Most females keep their kittens away from the father cat because some father cats are known to kill their own offspring’s so that the female cat can keep their focus on them and go back to estrus for mating.

Seeing the caring nature of Yello, the mummy cat can be assured of some help from this father cat. Lucky female I must say. Since they are pet cats, the female need not go out hunting for food for her kittens, but in the wild, cats have to hunt for food leaving their kittens at the mercy of Mother Nature hoping that other male cats don’t kill them.

After hearing the story of this unique father cat, I was intrigued and wanted to know about male cats and their care towards their own kittens. So, is it possible that male cats can show paternal instincts? Yes, father cats do occasionally spend time with their kittens, although this is not very often. Male cats are known to play around with their kittens and engage in play activities like licking them clean so that they stay healthy. This behavior is rare, but is not nonexistent and the strong example being the story of Yello, who stayed around with the mother until the cat was having kittens.

Experts would still warn that though some male cats can be completely harmless around their kittens, but it would be better to keep them away from them as an act of caution. Some tomcats are known to have killed their own kittens to divert the focus of the mother cat towards them. Newborn kittens don’t need any paternal care and hence it would be better to keep them away from the male cats. Don’t worry; mother cats do get help from other female cats. They help the mother cats by being attentive and helping in the grooming while the mother is away hunting for food. Other female cats are known to deliver food for the kittens of other cats.

Yello is a rare cat with fatherly instincts. The image of cat birth and caring until the female cat having kittens and later on licking the little fur balls is a perfect family portrait.